Posted by: Gabriel Canepa in Apache February 3rd, 2016 Comments Off on How to install the Apache web server (CentOS / Ubuntu Linux Installation) Views

In this post, we feature a comprehensive Tutorial on How to install Apache web server. This article is part of our Academy Course titled Apache HTTP Server Tutorial.

In this course, we provide a compilation of Apache HTTP Server tutorials that will help you get started with this web server. We cover a wide range of topics, from installing the server and performing a basic configuration, to configuring Virtual Hosts and SSL support. With our straightforward tutorials, you will be able to get your own projects up and running in minimum time. Check it out here!

In this example we will show how to install the Apache web server in CentOS 7.2 and Ubuntu 14.04.3 using the command line. According to recent reports, Apache continues to keep the lead in the number of websites and Internet-facing machines when compared to other web servers, such as Microsoft’s IIS or Nginx.

Such has been the case for a long time, and that is why the skill of knowing how to install, configure, and leverage Apache is on the rise everywhere.

In other words, by acquiring Apache skills you will learn how to use the number one server on the Internet. 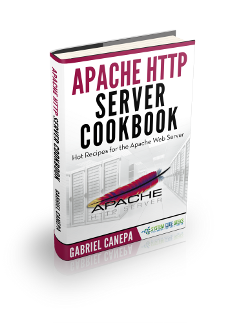 Perhaps the first thing that we need to note is that the package that includes Apache has different names in CentOS (httpd) and Ubuntu (apache2). The good news is that in both cases, the package is included in the repositories that are configured when the operating system is installed. For that reason, you do not need to make any modifications to the repositories in order to install Apache.

In addition, we will install an extra package named apache2-utils and httpd-tools in Ubuntu and CentOS, respectively. This package includes tools that will be useful to benchmark Apache, manage basic and digest authentication to web pages, and resolve IP addresses to host names in the logs, among other things.

However, before you proceed please keep in mind that installing packages require administrative privileges, so you will need to run the following commands either as root (in CentOS) or using sudo (in Ubuntu). With that in mind, let us proceed with the installation.

The package management system (yum or apt-get) will take care of installing all necessary dependencies required by the web server.

Once the installation completes, we need to check whether the web server has been automatically started. Typically, that is the case in Ubuntu but not in CentOS.

To check the running status of Apache in Ubuntu, type

In Fig. 1 you can see the expected output when the web server is running. Otherwise, if it is stopped (as we forced it to using

to restart it. By now, you can safely ignore the AH00558 error message as it refers to an aspect of the web server configuration that we will cover in the next tutorial of the Apache series.

Figure1: Checking the running status of Apache in Ubuntu

In CentOS, you will use systemctl (the system and service manager tool) to verify the status of Apache:

Fig. 2 shows the expected output when the web server is running and when it is not. Last but not least, we need to ensure that the web server is started automatically the next time the system boots. In Ubuntu, the installation process by default will configure it to start after a reboot whereas in CentOS, you will need to start it by hand:

and enable it for future reboots:

This ensures that Apache will be started by systemd each time the machine boots.

In Ubuntu, you can also get more information about Apache (web traffic statistics, server load and uptime, percentage of CPU usage, number of requests currently being processed, to name a few examples) using

In CentOS this command is aliased to

so you will not get more details than those shown in Fig. 2).

After you have successfully installed Apache and got it running, it is time to look into serving web pages. Although we will discuss this further in later articles, you need to know that Apache not only is used as a standalone server (that is, to store a single website or application), but also to run several sites (also known as virtual hosts) at the same time.

For the time being, it is sufficient to indicate the place where the web server stores pages and see how it returns them upon a request performed by a client – all in the context of a standalone server. To see Apache in action for the first time, launch a web browser and point it to the IP address of the machine where Apache is running, as shown in Fig. 3 (192.168.0.29 is a CentOS and 192.168.0.30 is Ubuntu). If you cannot see the test page after starting Apache in CentOS and your web browser says it can’t establish a connection to the web server, please check the following:

You can check #2 as follows:

and hit Enter. Then try to access the web server by IP as explained earlier.

To replace this default test page by one of ours, create a simple html file and save it as index.html in /var/www/html. You can use the following example if you want: Next, feel free to create other subdirectories under /var/www/html and more html pages, and hyperlinks between them.

Congratulations! You have already taken your first step towards mastering Apache.

In this tutorial we have explained how to install Apache, the most used server used by websites and Internet-facing computers, in CentOS 7 and Ubuntu 14.04. In addition, we showed you how to replace the default test page with a custom one.

In the next articles of this series, we will discuss in greater depth the capabilities of Apache. Stay tuned.

With monthly unique visitors and over authors we are placed among the top OS resources and development sites around. Constantly being on the lookout for partners; we encourage you to join us. So If you have a blog with unique and interesting content then you should check out our SCG partners program. You can also be a guest writer for System Code Geeks and hone your writing skills!
System Code Geeks and all content copyright © 2010-2023, Exelixis Media P.C. | Terms of Use | Privacy Policy | Contact